ERIE, Pa., Sept. 3, 2021 /PRNewswire/ — It’s back to school time for many states across the U.S. More pedestrians and vehicles will hit the streets, so it’s important for drivers to slow down and keep an eye out for kids around schools and their neighborhoods.

At Erie Insurance safety is a top priority. Here are five driving tips to keep in mind as kids head back to the classroom.

1. School Zones – Pay attention to school zones. Most often, schools have flashing lights with a posted speed limit sign during the morning drop off and afternoon dismissal. However, pay close attention during off hours when the lights come on for sports, band practices or other school related events. Speeding fines are typically doubled in school zones.
2. School Buses – Take extra precaution when you’re behind, or approaching, a school bus. It’s important to leave enough space between you and the bus to give kids room to cross the street. Many buses have retractable crossing “arms” that keep kids safely out in front of the bus when crossing the street and visible to other drivers. And remember, it is illegal in all 50 states to pass a school bus that is stopped to load or unload children.
3. School Drop Off – If you’re a parent and regularly drop kids off at school or take turns in a carpool, it’s important to plan ahead and understand your school’s drop off and pick up procedures.

Some tips from the National Safety Council include:

4. Focusing – As a parent or driver around schools, it’s important to avoid distractions in the car, such as cell phones or other electronic devices. Your driving skills should be on point, too. Make full stops at stop signs and leave enough room for kids to cross the street. It’s also a time to teach kids by example. Your attention to safety and caution while driving will resonate with them, especially teens, when they’re ready to get behind the wheel.
5. Traffic – This goes for anyone traveling during the beginning of the school day or end. There are more cars on the roads during these peak commute times. It’s important to not only watch out for kids and children traveling on foot or by bike but keep an eye out for other motorists or school buses making sudden stops. It’s always a good idea to allow a few extra minutes in the beginning of the school year to determine a new route or longer commute if necessary.

Even when you follow all the rules an accident can happen. Your Erie Insurance agent is there to make sure you get the right coverage so if something bad ever comes your way; you’re back on the road, right away.

About Erie Insurance
According to A.M. Best Company, Erie Insurance Group, based in Erie, Pennsylvania, is the 12th largest homeowners insurer, 13th largest automobile insurer and 13th largest commercial lines insurer in the United States based on direct premiums written. Founded in 1925, Erie Insurance is a Fortune 500 company and the 16th largest property/casualty insurer in the United States based on total lines net premium written. Rated A+ (Superior) by A.M. Best, ERIE has more than 6 million policies in force and operates in 12 states and the District of Columbia. News releases and more information are available on ERIE’s website at www.erieinsurance.com.

Sun Sep 5 , 2021
Firefighters are cleaning up after a four-alarm fire broke out at an auto repair shop in Nashua on Friday morning.Firefighters faced some initial challenges when they arrived around 11 a.m.“Just the access with wires, and with the people still in that apartment building, we had a lot of evacuating to […] 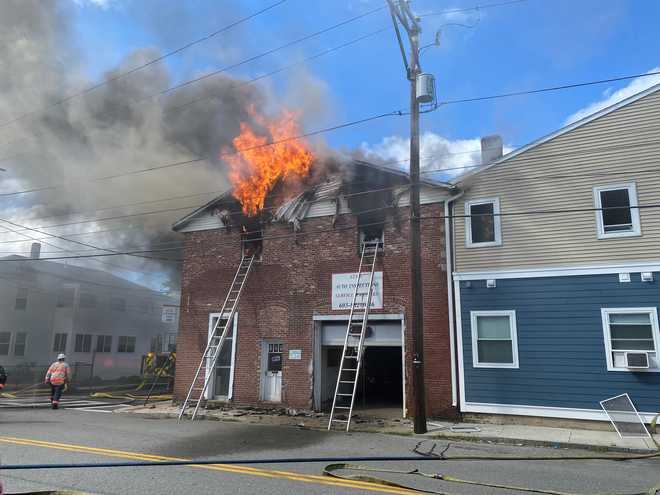