AutoZone, Inc. (NYSE: AZO), which provides aftermarket automotive spare parts, is one of the few businesses that operated almost at full capacity during the pandemic, thanks to the high demand. Interestingly, the company ended its most recent quarter with a larger store network than in the prior year.

During the pandemic, people generally deferred their plans to own new vehicles and went for second-hand models instead, concerned about the virus-induced strain on finances. The resultant increase in repair jobs, combined with widespread do-it-yourself maintenance activities, lifted the demand for spare parts and accessories. At the same time, AutoZone’s core revenue sources remained intact. Effective management of inventory mix helped the company cash in on those tailwinds, though a major part of sales comprised lower-margin merchandise.

Extending the rally that started last year, shares of the Tennessee-headquartered store operator climbed to an all-time high last month and outperformed the market, even as key financial metrics topped expectations consistently during the crisis period. Despite being one of the most expensive Wall Street stocks, AZO looks poised for more gains. According to experts, the time is ripe to buy the stock — for those who can afford it. 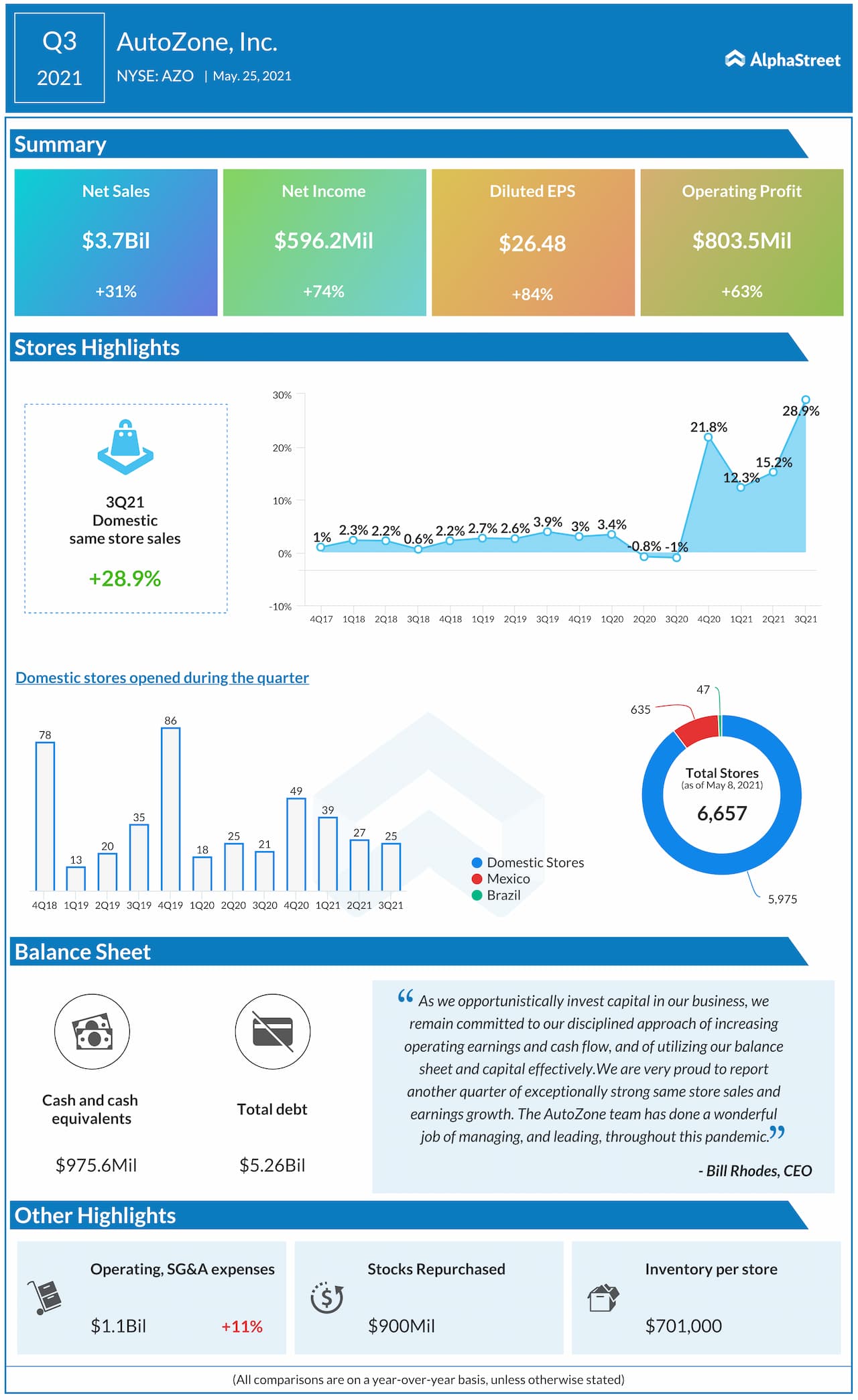 Recent investments in the business have strengthened AutoZone’s competitive position. While anticipating to leverage long-term opportunities, however, the management sees a modest drop in sales in the final months of fiscal 2021. With in-store inventories under pressure, it expects to leverage the revamped supply chain — which is already operating beyond normal capacity — to tackle the issue.

In the third quarter, comparable-store sales rose at a record pace of 28.9%, reflecting the positive demand conditions. Consequently, net sales climbed 31% annually to $3.7 billion and beat the estimates. At $26.48 per share, earnings were up 84% year-over-year and above the forecast. Meanwhile, gross margin decreased from last year, hurt mainly by capital investments and pricing initiatives. That, together with muted consumer sentiment, might impact performance in the near future.

Business remained very strong in many merchandise categories such as accessories and batteries, notably, brakes and rotors while still slightly below our average growth had a meaningful rebound this quarter due to the winter weather. As we expect, our sales growth from the pandemic-related surge will moderate over time, we believe the investments we have made in both our retail and commercial businesses position us to deliver outsized share gains, relative to the overall industry.

Reflecting the buoyant demand conditions, AutoZone’s rival Advance Auto Parts, Inc. (NYSE: AAP) this month reported strong first-quarter earnings that more than doubled year-over-year to $3.34 per share, supported by a 25% growth in comparable-store sales. The management expects the momentum to continue for the rest of the year.

AutoZone’s shares opened Tuesday’s session at $1,386 and traded higher in the early hours. After staying in an upward spiral for several months, the stock changed course last month and lost about 9% since then. But its value is still above the 52-week average.

Fri Jun 18 , 2021
Car and Driver Our review of the redesigned 2022 Honda Civic sedan is coming on 6/16, until then we decided to look back at the Civic’s greatest hits and how Honda’s iconic compact car has evolved over the years. From the November 1988 issue of Car and Driver. If you […]