DOVER – A car spontaneously caught fire late Friday night on Broadway as the driver pulled over to the curb to check on mechanical issues.

According to Dover Police Lt. Brant Dolleman, a 17-year-old female was driving her family’s 2009 Hyundai Sonata, when she started to hear loud, concerning noises followed by the check engine light appearing.

“She did everything right,” Dolleman said. “She saw the car was experiencing some mechanical issues and pulled over, and that’s when the car just caught on fire.”

Police say that the driver did not report any injuries and they do not believe that foul play was a cause, but cannot pinpoint the exact mechanical cause due to the extensive fire damage to the front end of the vehicle.

What to do if you have a car fire

“Car fires do happen sometimes and they are not always a result of criminal acts and may not have a clear cause as to what went wrong,” Dolleman said.

Dolleman said that the best thing to do in the situation is to exit the vehicle, call 911 and move away from the smoke and flames.

“When a car burns, there’s a lot that you don’t want to breathe in,” Dolleman said. “It’s not just about the heat and smoke, it’s about the dangerous chemicals that you can breathe in. And while cars typically don’t quickly blow up in a fireball like we see in the movies, it’s best to keep away from the vehicle.”

Wed Jul 28 , 2021
Heidi Mraz‘s automotive portraits are complex, collages of hundreds of pieces of ephemera specific to the car, so her artistic process is arduous. “Fifty percent of my time is just spent gathering information—talking to past drivers, restorers, owners; finding magazine articles and engineering notes in dusty boxes—to fill the provenance […] 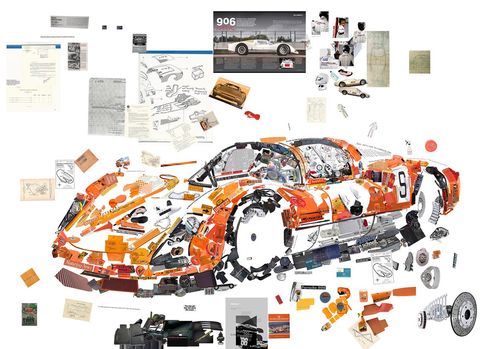