The annual Sturgis Motorcycle Rally drew an estimated 525,000 people over a 10-day period in the small town of Stugis, in rural Meade County in South Dakota.

The event was held from August 6–15 amid the global COVID-19 pandemic and a recent surge in cases due to the Delta variant.

It had no rules requiring use of face masks or physical distancing among participants.

Now, in the weeks after the start of the rally, COVID-19 cases in South Dakota have risen sharply, according to data compiled by the New York Times.

Meade County is now considered a COVID-19 hotspot, with a more than 100 percent increase in cases in the past 2 weeks. The Associated Press reports that contact tracers from five states have recorded 178 COVID-19 cases among individuals who attended the 2021 rally.

This is not the first time the Sturgis rally has been linked to a sharp uptick in COVID-19 cases.

Researchers at the Centers for Disease Control and Prevention (CDC) traced at least 649 cases to the event in 2020. Another study by economists who tracked cellphone data of rally attendees estimated that the event could have been responsible for up to 266,000 cases.

It’s unclear, however, whether the recent spike in cases and the 2021 rally are related.

Doug Schultz, a spokesperson for the Minnesota Department of Public Health, told Healthline that 24 Minnesota residents have been identified as having likely developed COVID-19 at the Sturgis rally.

“Anytime people are in large gatherings, and especially if they are not vaccinated, not wearing masks, or practicing social distancing, there is an increased risk of spread of the virus,” Schultz noted.

However, he added, “The impact that a single event like this has on overall caseloads is difficult if not impossible to assess, given that the SARS CoV-2 virus and the Delta variant are still so widely circulating in our communities.”

“Sturgis had all of the things required for a superspreader event and that seems to be what happened,” Brian Castrucci, DrPH, an epidemiologist and president and chief executive officer of the de Beaumont Foundation, a public health advocacy organization, told Healthline.

“What’s alarming with Sturgis is the defiance: ‘We know there’s this risk, but we’re going to do it anyway.’ They could have had a mask mandate or vaccination requirements,” Castrucci said. “What we hoped would happen is that the organizers would have met with public health experts and talk about how to have the event while minimizing risk.”

“We already had ‘learned’ the lessons from the Sturgis rally last year when it produced outbreaks across the country,” Dr. William Schaffner, an infectious diseases expert from Vanderbilt University in Tennessee, told Healthline. “We obviously have not embraced fundamental concepts.”

“When large numbers of unvaccinated and unmasked persons gather in close quarters over a week, that is the recipe for a superspreader event. The lesson is not to permit such events to occur,” he said.

However, Daniel C. Bucheli, communications director of the South Dakota Department of Health, told Healthline that “COVID-19 spikes are following a national trend being experienced in every state, not just South Dakota. This is similar to the same pattern we saw in last year’s season, and cases are increasing nationwide given the Delta variant.”

Bucheli said South Dakota officials are “not concerned” about the long-term impact of the Sturgis rally on public health in South Dakota.

“Anytime you have large crowds come together, there is potential for virus spread,” he said. “To date, we have only linked 66 COVID-19 cases to attendance at the Sturgis Rally. Considering this event hosted well over 500,000 attendees, we think increased COVID-19 awareness and the use of mitigation strategies worked — this, on top of having vaccinations and testing readily available during the event.”

South Dakota Gov. Kristi Noem was critical of the 2020 studies linking the Sturgis rally to the spread of COVID-19 and defended the 2021 event, telling Fox News, “We’re just allowing people to make personal choices and have personal responsibility over when they want to assemble, when they want to gather and spend time outdoors, and enjoy their way of life.”

“Any government official who cared about the health of her people would not want this kind of event in their state,” Castrucci said.

On the other hand, he noted, the Sturgis rally should not be singled out for criticism when other large, risky events also are taking place.

That includes the celebration rally in July for the Milwaukee Bucks winning the NBA championship or the upcoming Penn State football game, which will be played before a capacity crowd in Beaver Stadium this weekend with no vaccination or COVID-19 testing requirement of fans. Masks will be mandated in indoor locations.

“It’s important not to play into the politicization of the pandemic,” said Castrucci. “There’s nothing unique to Sturgis per se. If it was a ballet recital attended by Democrats, it would be the same situation.”

“Any event that involves a large number of people with no mask mandate or vaccination requirement is really just throwing gas on the fire,” he said. “As long as we describe this as a political issue and not a public health issue, the longer [the pandemic] goes on.”

Sat Sep 4 , 2021
Marine veteran D.J. Murphy picked earned the first win in his racing career in the opening feature at Goodyear All American Speedway on Saturday. Murphy, who lives in Richlands, made the long drive from New York after attending his younger brother’s wedding. Early in the race, he inherited the lead […] 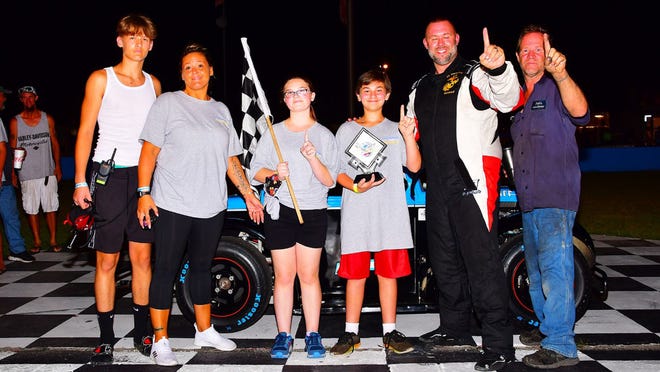