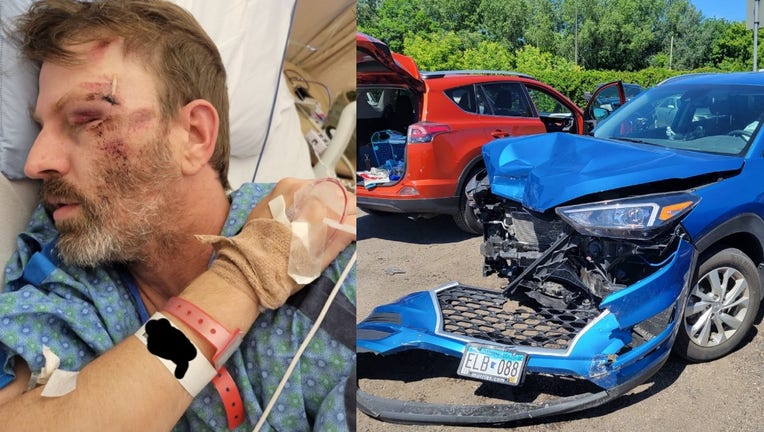 Domino’s pizza delivery driver Dave Rabenstein is recovering from a broken back and wrist after he was carjacked on Father’s Day in Minneapolis. (Dave Rabenstein / Supplied)

MINNEAPOLIS (FOX 9) – A Twin Cities metro pizza delivery driver injured during a carjacking last month is facing not only a long recovery, but also issues with his auto insurance policy.

A Twin Cities metro pizza delivery driver injured during a carjacking last month is facing not only a long recovery, but also issues with his auto insurance policy.

For more than three weeks now, Rabenstein says the only time he does anything more than move from the bed to his couch is to attend doctor’s visits following a frightening episode delivering pizzas in Minneapolis on Father’s Day.

Rabenstein, a more than 20-year veteran of Domino’s, now working out of the St. Louis Park location, was making a delivery run into southwest Minneapolis at an apartment building on the corner of Excelsior Boulevard and List Place.

He recalls walking up to the door and waiting for the customer to meet him when someone jumped into his Hyundai Tucson, which had the engine running, and tried to steal it.

“I turn around and see my car leaving,” said Rabenstein. “I set the pizzas down. And I start going after it. And that’s about all I remember.”

Witnesses would need to fill in the rest as the suspect quickly spun around Rabenstein’s SUV on the dead-end street and began driving toward him. The vehicle struck Rabenstein, running him over. He was knocked unconscious, his back fractured and left wrist shattered.

“The bone actually snapped in two,” he said.

Apparently, the thief would then crash the Hyundai before hopping into a getaway car that had a stolen license plate. The pair of suspects are still on the run, according to Minneapolis police.

“It’s scary, surprising,” said Rabenstein. “It can happen to anyone. I never thought it would happen to me.”

Rabenstein, an avid collector of PEZ dispensers and Star Wars memorabilia, says his life is on hold. His smashed SUV sits in his driveway.

Adding to the horrific pain of what happened, Rabenstein and his new wife, who he married in May, are left to deal with complicated insurance issues. He learned he did not have a special waiver for his Hyundai that would cover damage done while using a personal vehicle for delivery work.

“We see it all the time,” said Lindsay Keller, an attorney representing Rabenstein on the insurance matters.

Keller says more and more in the gig economy, people are using their own vehicles for delivery services, like pizza, restaurants and groceries. However, if they don’t specifically ask their agent or read their policies, they may never know if they’re covered should something go wrong on the job.

“Anytime there’s any accident or damage to your vehicle, if you are working at the time and using your own vehicle, there is not going to be coverage unless you have the special endorsement,” said Keller.

“We’re still waiting to hear on insurance,” said Rabenstein. “Don’t know what’s going on with them yet. It’s a little scary because it’s our future.”

Sun Jul 18 , 2021
One recent weekday at Jay’s Auto Repair in Detroit, cars filled the dozen bays and overflowed into the parking lot as mechanics worked to fix the backlog of vehicles needing repairs. That’s become the new normal as customers try to hang on to their aging cars, SUVs and pickups during […]