Do you remember that incredible sense of freedom you had when you passed your driving test? That realization that you really could jump in your car and go anywhere you wanted?

Unfortunately, most of us have also experienced the opposite feeling, when our car has let us down, leaving us stranded and frustrated.

And it’s not just old cars that break down. While older vehicles might be more likely to suffer major mechanical woes like cam belt failures, the complexity of modern cars means they’re likely to drive you mad with little electrical niggles.

So while the battered old Honda CR-V I use to ferry my dog around and collect supplies for my house renovation looks a little careworn, it’s rarely given me any trouble beyond the need to replace a tired battery.

Related: What’s The Most Reliable Car You’ve Ever Owned?

But I’ve run brand new cars alongside it that have been much more grief. I’ve driven Audis that have suddenly decided to go into limp mode for no apparent reason, Jaguars that would lock you out while the engine was still running, and a near zero-miles Range Rover Sport that would randomly cut out at 70 mph (112 km/h), leaving you with no engine power or brake and steering assistance. Ever tried to negotiate turns in a 5000 lb (2.2-tonne) car with manual steering?

Less dangerous, but certainly annoying, driving a high performance Italian car in the 2000s you’d get worried if the engine warning light wasn’t illuminated. Many of these little electrical problems aren’t that serious, and they didn’t always result in immobilizing the car, as was the case for this Murcileago. But they all necessitate a trip to a dealer. And if that means taking a half day off work, perhaps multiple times while a garage tracks down an intermittent fault, it can get boring fast.

But my most unreliable cars’ sketchiness has mostly been my own fault. One was an old Mini with a hot 1380cc motor fitted with a big cam that was forever blowing head gaskets, snapping head studs and just generally being a pain because I wouldn’t settle for the stock 1275’s 75 hp. I almost, almost, gave up and bought a sensible supermini.

The second was a Mk2 VW Golf GTi 16-valve that I greedily bought when all I could really afford was the 8-valve version. I soon realized why it was cheap, and spent three years chasing endless starting and running problems, though the core mechanical bits were strong enough to take it well past 150,000 miles before I did what I should have done the week after I bought it: made it somebody else’s problem.

What’s the most unreliable car you’ve ever owned or driven?

Wed Sep 8 , 2021
Ford Motor Co updates Sign up to myFT Daily Digest to be the first to know about Ford Motor Co news. An executive with responsibility for Apple’s secretive car project has left for Ford in a stinging departure that potentially spells the end of the iPhone maker’s automotive ambitions. Doug […] 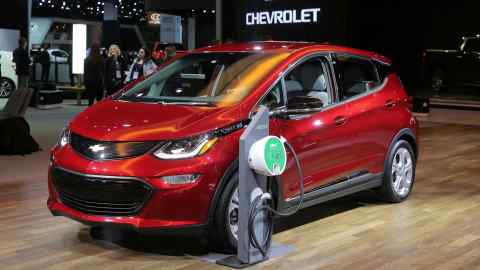