One of the secrets to the team’s success was the car’s aerodynamic structures — the wings, underbody strakes, diffuser and other components on the vehicle that move air more efficiently around the vehicle as it drives. Many of these components were 3D printed by partner Stratasys (Rehovet, Israel and Eden Prairie, Minn., U.S.), including the successful first application for a new toolless, carbon fiber-wrapped sandwich core technology.

Champion Motorsport has been a customer of Stratasys for several years, “but the partnership has turned into more than the typical vendor/customer relationship,” says Allen Kreemer, senior strategic applications engineer at Stratasys. For example, Stratasys and Champion previously worked together to test a new technique Stratasys had developed for 3D printing soluble tooling. With this technology, a soluble plastic core shaped for a duct or other tube-shaped part is printed and then wrapped with carbon fiber prepreg. Using a soluble support removal tank, the printed tooling dissolves, leaving a seamless, finished, hollow composite duct.

“That was really the beginning of our partnership with Champion Motorsport, where we worked together to create this very complicated, seamless carbon fiber duct in a non-traditional way, without boundaries like in CNC machining or molding,” says Patrick Carey, senior VP – Americas, products and solutions at Stratasys.

In 2019, the companies decided to partner on a project to test out a new iteration of the same technology: 3D-printed, carbon fiber-wrapped core that doesn’t dissolve in water, that is instead a structural core for the finished part or prototype.

Kreemer explains that for sandwich components, working with and shaping core materials — whether flexible aluminum honeycomb, rigid structural foam or something else — can be difficult and expensive, requiring shaping or machining and then molding with the carbon fiber composite skins in a dedicated mold. Stratasys prints a rigid honeycomb core using SABIC (Riyadh, Saudi Arabia) Ultem 1010 high-temperature plastic. “We print the exact shape to fit on the car, then simply wrap with carbon fiber, bag and cure, without using a mold,” Kreemer says. “We started with the soluble cores, which our customers still use, and now we’ve moved into these sandwich cores, which will have broad applications in aerospace and automotive.”

“We call it ‘toolless,’ and that’s really the key,” adds Carey. “We’ve created this application to skip the whole process of building the mold and then laying up in the mold.” He notes that the elimination of tooling also allows the shape to be easily changed as needed.

For the Champion Motorsport project, three different technologies went into the 16 total aerodynamic parts that Stratasys built for either prototyping or final installation on the race vehicle, Carey explains. “We printed the Ultem 1010 [carbon fiber-wrapped] cores, we 3D printed some parts using carbon fiber-filled nylon 12, and we printed parts using nylon 6 when flexibility and impact strength was required.” 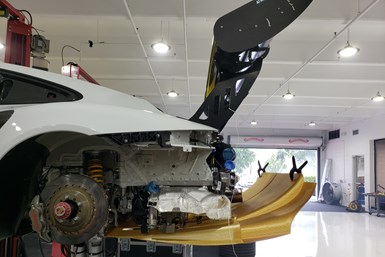 The largest part was a 7-foot-long, 5-foot-wide rear diffuser prototype part that was built for testing out the final part design. It was printed in seven pieces on an F900 fused deposition modeling (FDM) Stratasys printer using Ultem 1010 polyetherimide (PEI) polymer, bonded together, wrapped in carbon fiber prepreg, bagged and oven cured. The turnaround time for the part was about five days for printing and just over 24 hours for layup and cure: “It was extremely fast, and what we needed at the time,” notes Chris Lyew, mechanical engineer at Champion Motorsport.

Caused by the uncertainty of whether in-person events could be held this summer due to COVID-19, “the project came online last-minute, and a lot of systems needed to be addressed at the same time,” Lyew explains. “Aerodynamics is one of them, and it’s normally a very time-consuming process” of designing, testing and iterating the components, he says. Conventional methods would require the creation of tooling, hand layup on the mold and cutting and fitting of the core. “Without this process, we couldn’t have met our target dates for testing the car on the track,” Lyew says.

The car’s front splitter was also prototyped and tested in a similar way. For the parts that were prototypes, the final production parts were made with traditional tooling, but the prototype part was used as a pattern for testing different iterations. Carey notes, “With a toolless process we can iterate faster, test it, then iterate faster, test it. With traditional tools, you would never be able to iterate, you just make one and you’re stuck with it. Here, we’re able to make a real part, test it and learn from it.”

A number of smaller production parts were also produced by Stratasys. For example, winglets on either side of the car’s front bumper were printed from 35% carbon fiber-filled nylon 12, the vehicle side skirts were also printed in Ultem 1010 with a honeycomb internal fill and then overwrapped in carbon fiber.

Many of the car’s aerodynamic “strakes” — small fin-like pieces that bolt to the exterior of the vehicle in strategic points to help control airflow around the vehicle — were also printed from either carbon fiber-filled nylon 12 or unreinforced nylon 6. These parts are designed to be easily redesigned, or replaced as needed due to damage or wear. “At Pikes Peak, there are quite a few rough terrain features that could potentially cause damage, so the ability to replace [the strakes] easily was key for us,” adds Lyew. Several spare sets were also printed and delivered for easy replacement during the race as needed.

Pikes Peak ended up being an ideal race to test this technology, Kreemer says, because of the unique environment specific to this event, which is held at 14,000 feet of altitude at the highest point. “All racecars use downforce to push the car to the track to gain traction, but these particular cars on Pikes Peak are unlike any other form of motorsport in the world, because they need really exaggerated aerodynamic effects to hold the cars down to the track [at that altitude].” The result is larger wings and other aerodynamic components than would be used on any other type of racecar.

Going forward, Stratasys plans to introduce its toolless printed core technology to other racing companies for similar aerodynamic parts. Carey says there are many other potential applications in low-volume automotive, recreational marine or even interior aerospace parts in future as well. “Any application that requires iteration or a custom design, we believe we can add value there,” he says.

Sat Aug 14 , 2021
SUNNYVALE, Calif.–(BUSINESS WIRE)–Sonatus, a leading automotive software company that is unlocking the full potential of the software-defined vehicle, today announced a partnership with Hyundai Motor Group focused on innovations within the E/E architecture across Hyundai’s vehicle lineup, including Genesis, Hyundai, and Kia. As a first and foundational step, the two […]