We expect the automotive industry’s recovery from pandemic-driven lows to begin in earnest in 2021. After U.S. light-vehicle sales came in far below forecast in 2020 (14.6 million compared with our initial prepandemic estimate of 16.5 million), we expect about a low-double-digit percentage increase to 16.0 million-16.2 million in 2021.

Though some of the automakers that we expect to play the biggest roles in this recovery do not have moats (such as General Motors (GM), Toyota (TM), and Volkswagen (VWAPY), we believe that there is value to be found elsewhere in the automotive industry, such as in suppliers–particularly Adient (ADNT) and BorgWarner (BWA).

We cover these forecasts and other trends shaping the automotive industry in our annual “Moats, Motors, and Markets” report. Here, we take a closer look at our findings from each of those three aspects: moats, motors, and markets.

What We Expect for the Markets

On a global scale, after a 15% decline in 2020, we expect light-vehicle demand to rebound 9%-13% in 2021. The continuing fallout of COVID-19 presented several forecasting challenges, so we have maintained a wider-than-normal 2 percentage points in our forecast range to reflect continued COVID-19 risks and supply chain constraints from a microchip shortage. Ultimately, as shown in the chart below, we forecast global recovery to normalized demand in 2023. 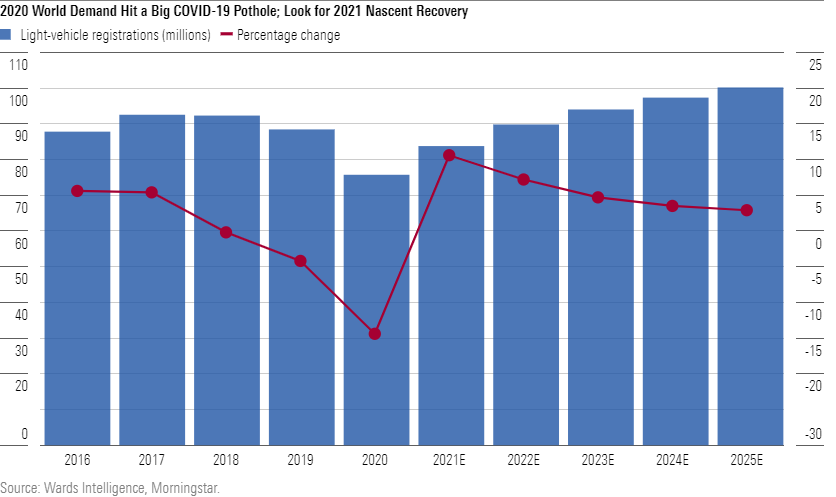 As noted above, we expect light-vehicle sales in the United States to lift from 14.6 million in 2020 to 16.0 million-16.2 million in 2021. The greatest risks to our forecasts include incorrect assumptions about the U.S. economy’s recovery, a resurgence of COVID-19 infections, delays in vaccine distribution, and the potential effect of a microchip shortage.

However, there are also reasons to be more optimistic about auto sales. For instance, low inventory could be holding back sales, and the vaccine could enable the economy to come roaring back to normal.

Furthermore, the automotive industry has seen severe lows before and always recovered. At the depths of the Great Recession in 2009, auto sales bottomed out at 10.43 million–the worst auto sales rate per capita since at least 1951. But, as shown in the chart below, that meager year was followed by three straight years of low-double-digit growth. 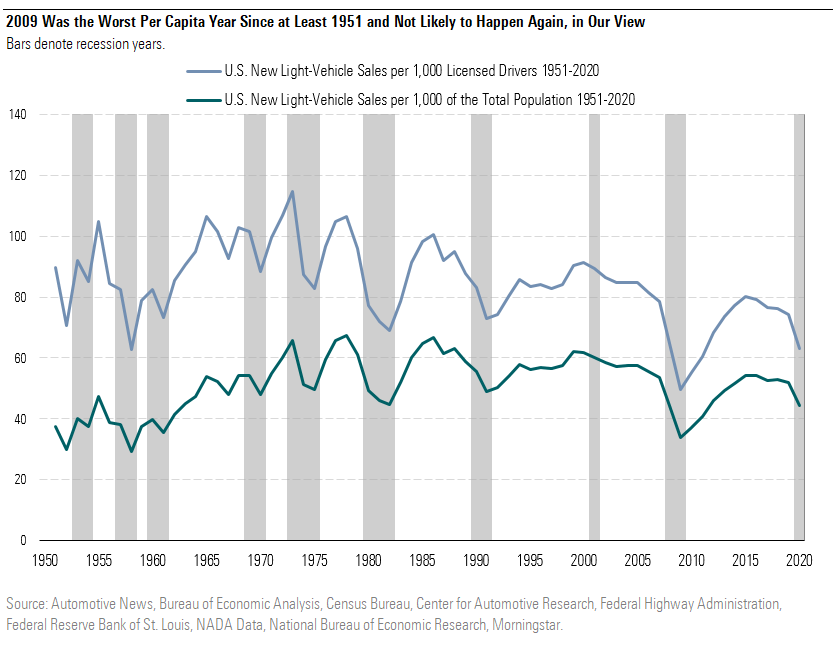 There’s also the fact that the current fleet of cars on U.S. roads is at a record age of around 12 years, and strong credit access and cheap gas prices may encourage people to trade in their older vehicles. Credit access remains healthy, and we don’t see evidence of a subprime auto lending bubble.

Moat or No Moat, These Automakers and Auto Suppliers Have Strong Potential

Generally, there are more economic moats to be found among auto-parts suppliers than automakers, and we think that the market has underestimated the economic moats of suppliers like Adient and BorgWarner. However, given current market conditions, we believe that some automakers still have compelling stock valuations.

Aside from certain brands, automakers’ capital intensity and stiff competition often result in the destruction of economic value. Even so, a wide-moat stock can be expensive, like Ferrari (RACE), and no-moat stocks can be cheap. The latter is precisely what we currently observe with Daimler (DDAIF), Ford (F), Nissan (NSANY), and Renault (RNO).

The market recognizes that auto suppliers produce higher profitability and returns on invested capital than automakers, without necessarily recognizing shareholder value attributable to the companies’ economic moats. In contrast, the investment community realizes that original equipment manufacturers generate lower profits and returns than suppliers but may not specifically attribute relatively lower valuation to a lack of economic moats.

We conclude that some suppliers’ stocks have been priced without considerations for cyclical downturns. And conversely, we find that valuations on some OEM stocks remains too pessimistic, which has led to generally higher star ratings among OEMs than suppliers.

With these factors in mind, here are a few of our stock picks in the auto sector:

The Automotive Industry’s Road Past the Pandemic

Our five-year sales forecast calls for U.S. sales to sharply rebound this year to levels more indicative of a market in recovery than one ravaged by a pandemic. But until COVID-19 is firmly behind us, there will continue to be uncertainty in our forecast.

With less-than-ideal macroeconomic conditions, neutral-at-best credit for future sales growth, and continued robust used-vehicle supply coming from off-lease vehicles, we think new-vehicle sales growth will be modest for a while after 2021. Still, since 2020 was such a poor year, we don’t anticipate any major negative changes.

We note that the automotive industry accelerated cost-saving initiatives in 2020, which should result in improved asset utilization in 2021. Consequently, we think automotive companies should generate substantially better profits and returns for investors this year.

Sun May 9 , 2021
So you are looking to buy your first collector car and are wondering where to start. I’m here to help, and bring along the experience of having owned more than such vehicles over the years — and I have done it right and done it wrong. And now I’m willing […]